The digital commons: a political and economic game-changer 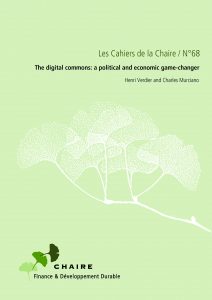 by Henri Verdier and Charles Murciano

This paper addresses the current intellectual and legal status of the commons. Specifically, we explore the notion of the digital (or information) commons and its specificities with regard to the classic concept of the commons in economic theory. The digital commons concerns new ways of administering an information resource by a community, made possible by information and communications technology. It constitutes a means of sharing socially valued resources. Economists agree on a classic conception of common goods, designating a rival and non-exclusive resource. Because the digital commons is immaterial, this definition is unsatisfactory. In addition, the work of Elinor Ostrom emphasizes the duality of the commons: both a resource used in common and a property-rights regime running counter to the paradigm of private property. Our paper thus examines this ambiguity in the digital age. Careful study of examples of digital commons promoted by the state can clarify the contributory logic at work in these commons. We argue that this approach authorizes a new form of public action. Allied with the “multitude”, the public authorities could, by nurturing and supervising the commons, arm themselves against the growing hegemony of big monopolistic platforms, whose logic is increasingly opposed to that of the state.