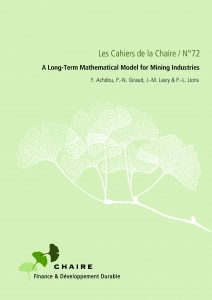 A parcimonious long term model is proposed for a mining industry. Knowing the dynamics of the global reserve, the strategy of each production unit consists of an optimal control problems with two controls, first the ux invested into prospection and the building of new extraction facilities, second the production rate. In turn, the dynamics of the global reserve depends on the individual strategies of the producers, so the models leads to an equilibrium, which is described by low dimensional systems of partial differential equations. The dimensionality depends on the number of technologies that a mining producer can choose. In some cases, the systems may be reduced to a Hamilton-Jacobi equation which is degenerate at the boundary and whose right hand side may blow up at the boundary. A mathematical analysis is supplied. Then numerical simulations for models with one or two technologies are described. In particular, a numerical calibration of the model in order to t the historical data is carried out.