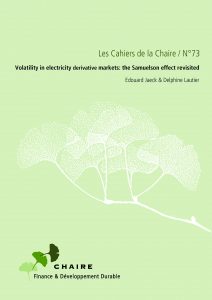 This article proposes an empirical study of the Samuelson effect in electricity markets. Our motivations are twofold. First, although the literature largely assesses the decreasing pattern in the volatilities along the price curve in commodity markets, it has not extensively tested the presence of such a dynamic feature in electricity prices. Second, the analysis of a non-storable commodity enriches the literature on the behavior of commodity prices. Indeed, it has been sometimes asserted that the Samuelson effect results from the presence of inventories. We examine the four most important electricity futures markets worldwide for the period from 2008 to 2014: the German, Nordic, Australian, and US markets. We also use the American crude oil market as a benchmark for a storable commodity negotiated on a mature futures market. Our analysis has two steps: i) in addition to the traditional tests, we propose and test a new empirical implication of the Samuelson effect: price shocks should spread from the physical market to the paper market, and not the reverse; ii) based on the concept of “indirect storability”, we investigate the link between the Samuelson effect and the storability of the commodity. We find evidence of a Samuelson effect in all of the electricity markets and show that storage is not a necessary condition for such an effect to appear. These results should be taken into account for the understanding of the dynamic behavior of commodity prices, for the valuation of electricity assets, and for hedging operations.